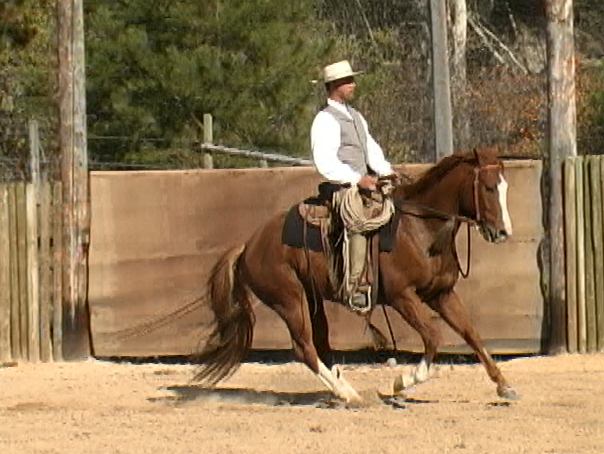 Hello, I’m Ty Heth. I have earned a living out of a saddle now for 30 years as a horse trainer and a cowboy. I met and rode with Horseman Ray Hunt in 1989. Ray rode a Wade tree saddle with a dropped rigging, wood post dally horn, a Cheyenne roll and big flat bottom monel stirrups. Ray also rode with a McCarty rein set up on his snaffle bridle.

When I showed up for that first clinic I was riding a swell fork saddle with a Will James tree, 1in wide brass Oxbow stirrups and split reins on my snaffle bridle. As Ray taught us how to start colts and improve our horsemanship, I grew to admire this man greatly.

I asked a lot of questions about not just his style of horsemanship but also the gear he used to apply that horsemanship. Neither of which I had seen in my region of Montana. When I asked Ray why a Wade with a dropped rigging instead of a swell fork with a d-ring he explained that he needed his saddle to fit a wide variety of horses with a fork that sat down low close to the horse’s withers to eliminate as much leverage and rock as possible when dallied to a cow or another horse. He said there was no other saddletree that was as versatile, functional or as comfortable to both horse and rider as the Wade.

When I asked about his wide bottom stirrups which looked odd to me, he said, “I want to ride my horse on the balls of my feet in a vertical, balanced, athletic riding position so I can help my horse do his job. I don’t want to ride on my arches with my feet out ahead of me and my butt pushed back against the cantle where I’m always behind the motion of my horse with him dragging me along for the ride.” Then he said, “besides would you be more comfortable standing on the edge of a 2×4 all day or on the flat part?” Pretty hard to argue with that I thought or a man that had  buckarooed, mustanged, started thousands of colts and cowbossed  some of the biggest outfits in the Great Basin.

By traveling the country starting Colts and teaching horsemanship clinics Ray changed the way colts were started. Horses were ridden and the way many of us thought of the horse. He also spread the use of the Wade saddle out of the Great Basin to literally every state in the country and many countries around the world. I rode with Ray for over 20 years and owned over 30 custom-made Wade saddles in that time. Some good, some not so much. Not all trees or all saddles are created equal.

Almost 20 years ago I met Bob and Julie Trezona of Bitterroot Saddle Company . We got together and designed a saddle we were all proud of. Bob built saddles and stamped them with my stamp, Vaquero Traditions and I  sold them to my clients at my horsemanship clinics. After over 150 saddles later about 10 years ago Bob said, ” I want you to come learn to build your own saddles.” He said, “Someday I am gonna to be too old to build saddles and you’re gonna to be too old to ride colts.” So that’s what we did. I learned to make saddles from my friend Bob and have been at it for the last 10 years as well as conducting my horsemanship clinics.

I feel so fortunate to have been able to learn from such a first-rate craftsman. I do not have Bob’s 37 years experience at building saddles yet, but I do build a damn good saddle with a really good balanced seat that fits both horse and rider. My goal with the saddle making as with my horsemanship is to improve every single one so that my work is something my teachers would be proud of.